Essential Oils have a Long History

Essential oils and their use by humans goes back as far as written or pictorial representation, and may even go back further - to the time when humans roamed the earth.

The early peoples were part of nature, knew the seasons, the animals and the plants and lived in deep harmony with all of nature.

Plants were part of every occasion for the early peoples: eating, healing, building, spiritual and cultural rituals, and preparing their dead for the afterlife.

They knew the properties of all the plants in their area and as trade and travel become commonplace more information was available.  The uses of more exotic and distant plants was acquired and utilized in their lives.

We know the Egyptians used aromatic essences for cleanliness, body odor, healing the sick, perfume and embalming their dead. Many of the oils were imported from the East, China and India, where their properties were well known and in use for many thousands of years. These oils were expensive and only the elite were able to use them.

Hippocrates (called the Father of Medicine) is reputed to have said “the way to health is to have an aromatic bath and scented massage every day”.

In fourth century Greek life it was understood that burning certain plants would offer protection from airborne contagions. 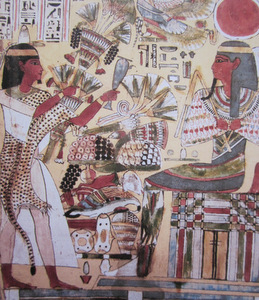 Avicenna is a well known Arabian physician who lived from 980 to 1037 and who wrote comprehensively on medical matters.  He researched and used the rose extensively in his medical works.  Avicenna is most remembered for his refinement of the distillation process.

Natural perfumes were used widely in the middle ages to ward off “evil spirits” and noxious vapors – apart from any cleanliness issues, the natural scents of the oils used helped to keep body odors to a minimum.  Many “herbals” were written to describe the various functions and applications of essential oils.

The man most acclaimed as the person who brought the use of essential oils to prominence in the 1920s is a French cosmetic chemist named René-Maurice Gattefosse.

He suffered an injury to his arm and in an attempt to cool the burn he accidently immersed his arm in a container of lavender oil, which was the closest thing to hand. He was amazed to find that the burn didn’t hurt as much, didn’t show all the usual reactions, and healed quickly.

He then spent his life studying the healing properties of essentials oils.

He was the person who coined the term “Aromatherapy”.

From those early beginnings we have transformed the concept of medicine from using plants in their natural state to synthesizing those properties which plants possess and producing a synthetic version.  The medication now prescribed by doctors often has side effects which can trigger other ailments, which in turn require more medication.

This has reached the point where we are now re-evaluating just what is medicine?  How can these prescription drugs heal when they have so many harmful components?

This state of affairs has prompted a revisit to all natural products in an effort to find relief from diseases without attracting more medical problems than we initially started with!

In reality, so many of these health issues could be better served by using a natural product, like essential oils.

Natural plant extracts, pure essential oils, do not leave toxins in the body, they do not compromise other bodily systems, and taken correctly, will be of benefit in an immense variety of ways to our health and the health of our environment.